Globalization and Its Effect on Poverty

Globalization and Its Effect on Poverty

Globalization has helped raise the standard of living for many people worldwide. It has also, however, driven much deeper into poverty. Small businesses and third world countries are not capable of updating their technology as often as their larger, wealthier counterparts. Unable to compete with multinational firms and wealthy nations, small businesses and third world countries and forced to do business locally, never growing and reaching their full potential.

Technological advances are made daily throughout the world. However, it is expensive to make and transport these advances globally rapidly. This high production cost causes the consumer’s price to be unnecessarily high. Today, many countries in the world cannot afford to pay such a high price for the latest technology, and by the time they can afford to pay, newer, more advanced technology exists. The democratization of technology benefits mainly the wealthier countries. 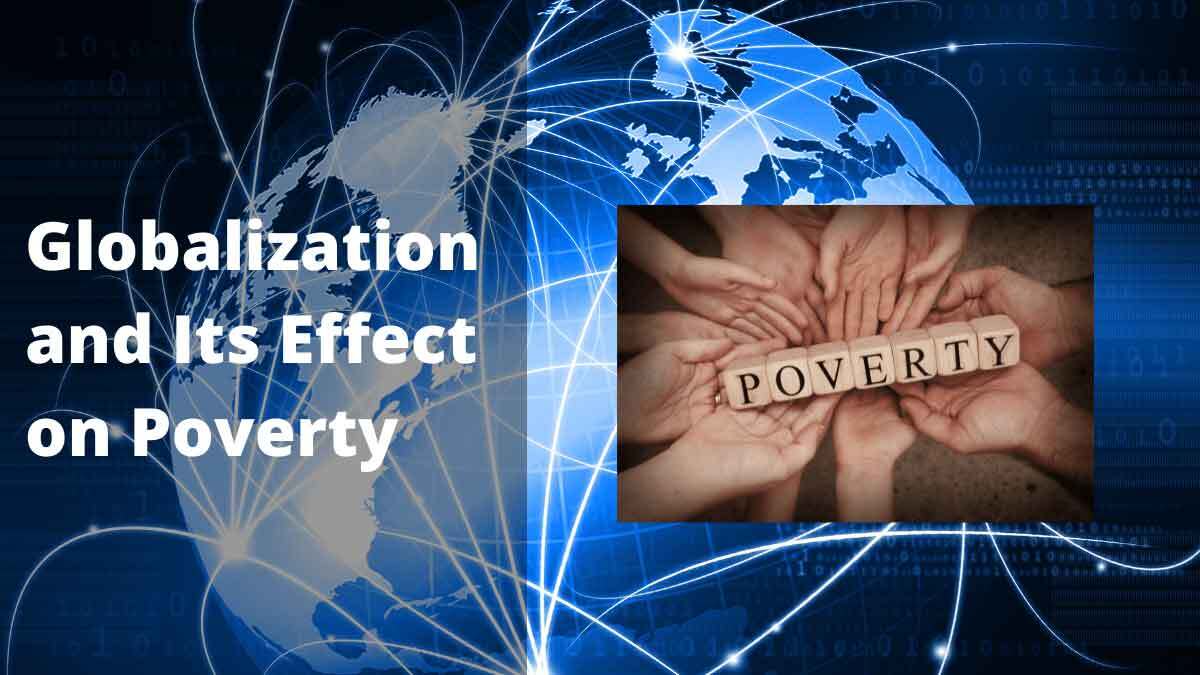 Technological advances not only benefit wealthy countries but also wealthier companies. Technological advancements allow countries and their company’s worldwide publicity when they are successful. Because investors can easily invest on the Internet, on the telephone, and through facsimile machines, the profits of companies have increased greatly. Currency traders all over the world have also been able to update exchange rates and notify the public of the updates more rapidly. This has led to more desire to finalize deals because companies can be sure that they are receiving competitive exchange rates. Swissair, an airline, based in Switzerland, even moved its entire accounting division from Switzerland to India simply because the accountants in India are among the best in the world. They were able to do this because all of the information from their new office halfway around the world was transmitted through the use of technologically advanced devices. Because labour is cheaper and the workers are more skilled in India, the company benefited in two ways. For the same reasons as in India, Thailand has moved from being primarily a rice-producing nation to the world’s second-largest producer of pickups and trucks.

The global marketplace is based on a winner take all system. The wealthy, “winning” companies and countries can sell their goods and services to a global market. In contrast, the “losing”, poorer countries and businesses are limited to their local markets. Massive global markets also create huge incentives for businesses and nations to market products internationally. The National Basketball Association, for example, in 1998 sold more than five hundred million dollars in licensed merchandise worldwide. The NBA owes this huge source of income to advances in technology. Basketball organizations in other countries that cannot afford to market their organizations globally, however, are forced to sell licensed merchandise only in their countries, substantially lowering potential profits. In the past fifty years, global capitalism has raised the living standards of more people higher and faster than the previous five hundred years. Increasing the number of “haves” in the world has also dramatically increased the number of “have-nots”. It has also driven the poor further into poverty, making it more and more unlikely that they will ever recover.

This gave the wealthier countries an enormous advantage because a product that previously required months to ship by sea would take a matter of days to reach its destination by air and automobile. Businesses in the wealthier countries were also able to send their executives around the world to meet with executives from other countries and close their deals, while the executives of businesses from poorer countries were still on their boats travelling. If a country does not update its transportation industries, international companies will not want to build warehouses and distribution centres within that country.

This, in turn, creates high unemployment rates, driving the people further and further into poverty. According to Moore’s law, computing power doubles every eighteen to twenty-four months. This means that only countries that can afford to pay millions every year and a half will have the newest technology. The newest technology that many countries can afford is sometimes outdated by years, driving their economies further into poverty because they are unable to compete with wealthy countries. For the wealthier countries, however, an increase in computing speed leads to faster transfer of documents. It also speeds up production because faster machines that are capable of handling more data are used in factories in wealthier countries. Compression technology has also allowed for lower costs in wealthier countries because disks can hold more information. The amount of data that can be stored on a square inch of the disk has increased by sixty percent every year since 1991. Along with compression technology, comes miniaturization. Because the size of the chips has decreased, so has the size and weight of computers and phones. Since there is less material used to make the product, the cost is lower, allowing for more profit.

Advances in computer technology have greatly benefited wealthy countries and greatly hindered the economies of developing countries. Many foreign companies and countries are using the poverty of other countries to their own advantage. Most foreign firms pay their workers more than the national average of the country. However, many times what the workers are paid is considerably lower than the average wage for the companies home country. Foreign companies are also creating jobs faster than their domestic counterparts, leading to higher poverty levels in the country because the profits of the company are not invested back into the country where the company is located, but rather sent back to the home country. Most foreign businesses also spend heavily on research and development in the country where they are located; however, the benefits of the new, more advanced products are reaped in the home country. Foreign firms also export more than domestic ones, taking with the products, profit and future investment in the country.

Many countries’ economies are growing and expanding at the expense of smaller, poorer countries. Effective countries and businesses are not merely the most technologically advanced. They are also the ones who are constantly seeking to upgrade and improve their existing technology. The world’s poorer countries cannot afford, however, to upgrade their technology as often. Nevertheless, countries and businesses must always work to increase the speed of transactions, investment, production, and government. They must also learn to operate their existing software and networks at full potential before it is updated so that the efficiency is maximized. Low productivity within a country or a company leads to a low standard of living and higher levels of poverty. Low productivity within a nation or a company also causes it to be less competitive in the global marketplace. If a company or a nation cannot afford to update their goods and technologies constantly, then they will not be able to compete globally. Foreign competitors set the standard for quality and production schedules of goods. Again, if a company is unable to update its factories, it will not be competitive and have more poverty. The democratization of finance has helped globalization flourish. The wealthy countries, however, are reaping the majority of the benefits. While there is more money available for companies to get started, the majority of the profits of the new companies are being invested in wealthy countries. Investments in the United States have gone from one hundred million to nearly three trillion dollars.

While the economy of the United States has developed into one of the strongest, most stable in the world, many third world countries were forced deeper into poverty as a result. A contributing factor to the success of globalization has been the creation of alliances and economic integration. The countries that benefit the most from these alliances, however, are traditionally wealthier. Free trade, customs unions, common markets, and economic unions are essential to the spread of globalization; however, they impede the growth of third world countries not included in the group.

Globalization, while essential to the success of the global marketplace, has a darker, less visible side. It benefits some third world countries, most wealthy countries, as well as large, well-known multinational companies. It, however, causes the economies of many countries and smaller companies to collapse. To promote competition worldwide, globalization has actually rendered it impossible for some companies that were successful locally in transferring their success to the global stage. It has also blocked investments and growth of some poorer, third world countries. Globalization decreases poverty in some countries while simultaneously increasing it in others.